The National Sleep Foundation estimates that 18 million adults have obstructive sleep apnea and it is likely that OSA also affects 2% to 3% of children. Yet, people who have OSA may not be aware they have a problem. If someone close to you has spoken of your loud snoring and has noticed that you often wake up abruptly, gasping for air, you should consult your Oral and Maxillofacial Surgeon (OMS). 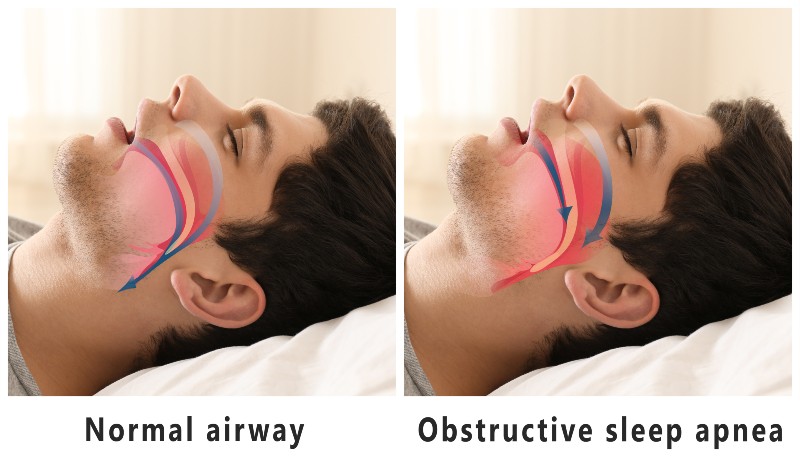 During sleep, the upper airway can be obstructed by excess tissue, large tonsils and/or a large tongue. Also contributing to the problem may be the airway muscles, which relax and collapse during sleep, nasal passages, and the position of the jaw. The cessation of breathing, or “apnea,” brought about by these factors initiates impulses from the brain to wake the person just enough to restart the breathing process. Sleep apnea is generally defined as the presence of more than 30 apneas during a seven-hour sleep. In severe cases, periods of not breathing may last for as long as 60 to 90 seconds and may recur up to 500 times a night.

Depending on whether your OSA is mild, moderate or severe, your OMS will select the treatment that’s best for you. This can range from behavior modification to oral appliances to an air pressure device. Surgery may be a good alternative for some patients, but it’s important to keep in mind that no surgical procedure is universally successful. Every patient has a different shaped nose and throat, so before surgery is considered your OMS will measure the airway at several points and check for any abnormal flow of air from the nose to lungs.

An OMS has considerable experience and the necessary training and skill to perform the following surgical procedures:

An estimated 18-20 million adults in the US suffer from OSA.

Call our office today to schedule a consultation with Dr. Sharma.

If you want to stay up-to-date on the latest industry news and best practices for dental professionals, subscribe to the Sharma Oral Surgery Newsletter. You’ll receive hand-picked articles and info to grow your practice. Learn about videos that will keep you informed and can count toward continued education credits. See announcements for new upcoming virtual events.